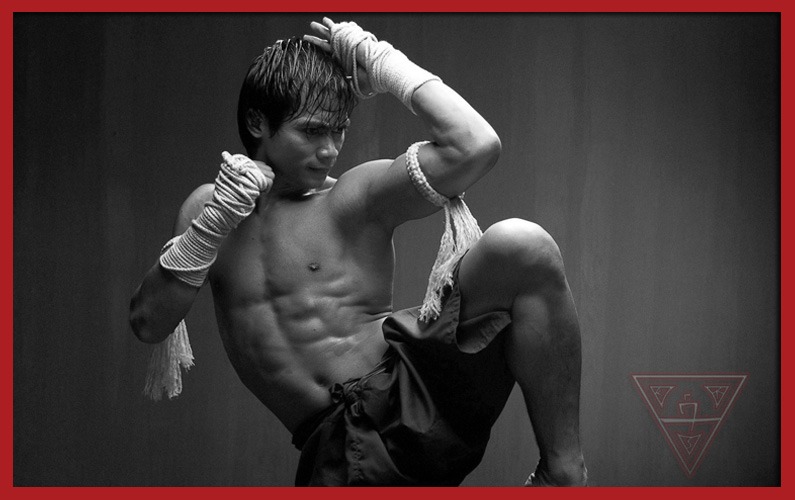 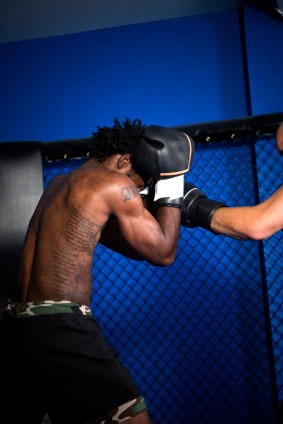 The fighter on the left is covering up as a defensive tactic to avoid taking the brunt of his opponents punches.

The majority of martial arts that involve stand-up fighting have similar defensive positions, though within those fighting styles, there can be slight variations in regards to technique. The most popular guard styles include slipping, bobbing and weaving, parrying, covering up, and clinching.

Slipping, also referred to as sidestepping, is the process of rotating one’s body so that punches and kicks will pass beside the head. As the punch or kick is being delivered, the fighter quickly steps to the side, with his back foot, turning his hips and shoulders away from harmful strikes.

Parrying, or simply blocking as most refer to it as, is intended to deflect opponent’s strikes with specific types of blocks. When parrying, the fighter will typically use his forearms and shins to redirect punches and kicks respectively.

Bobbing and weaving involves a combination of lateral and vertical head movement designed to avoid punches and kicks by moving underneath them. As strikes are thrown, the fighter dips his head from right to left (bobbing) and while in his fighting stance he moves up and down and back and forth with his knees (weaving). After dodging his opponent, the fighter is ready to reengage with strikes of his own.

Covering up, or the cover-up as some refer to it, is different to parrying in the sense that the fighter uses fists (often with various size gloves on) to absorb blows rather than deflect them. Covering up will most often involve protecting the head with hands held high and elbows tucked close to the body; however, the knee can be chambered to cover-up the lower body to protect against kicks.

The clinch is often utilized in kickboxing and Muay Thai. This form of grappling takes place when a fighter grabs his opponent from the neck/shoulder area in effort to “tie-up” his opponent so that he is unable to throw punches. Often the clinch is then used to hold the opponent’s head while delivering high knee strikes.

For those who are practitioners of martial arts, or those who want to learn the sport, studying these basic defensive positions is a vital part of developing into an all-rounded fighter. Regularly practicing these guard styles will teach the body muscle movement memory, so that the fighter will act instinctively to various different threats.