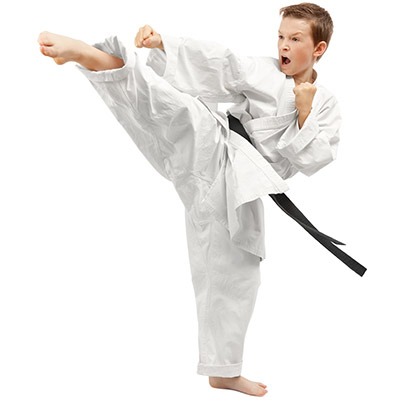 See What Our Chandler Kickboxing Parents are Saying

What Type of Kickboxing Will I Learn?

Kickboxing is a form of martial arts that involves stand-up fighting where punches and kicks are the main form of attack. The sport of kickboxing was first developed from karate, quickly adopted by Thailand martial artists who introduced Muay Thai, and later modified with western boxing techniques. Today, most kickboxing practitioners take up the sport for self-defense education, to be a part of a group work-out regimen, or for competitive sport.

Which Kickboxing Strikes & Techniques Will I Learn?

Punches that are permitted in kickboxing include the jab, cross, hook, uppercut, backfist, flying punch (a.k.a. superman punch), and overhand. The kicks that are allowed include the front kick, side kick, roundhouse kick, hook kick, crescent kick, axe kick, and sweeping kick. Defensive techniques include slipping – quick rotation of the body to move away from strikes; bobbing and weaving – movement of the head and upper torso; blocking – use of arms and legs to absorb and deflect strikes; covering up – a last opportunity to stop direct strikes to the head; and clinching – holding or tying up an opponent by grabbing the back of his head with both hands.

What Equipment Will I Need for My Kick-boxing Class?

Kickboxing requires specialty equipment, and you will find it in abundance at Sandoval’s gyms. As well as being pristine clean with excellent lighting and changing facilities, our martial arts locations come fully equipped with all kickboxing pads, kicking bags, and punching bags. There is padded flooring, extra equipment of different sizes, brand new punching bags, and much more.

What Will I Get Out of Learning Kickboxing?

People join kickboxing classes for a variety of reasons, including health improvement, exercise, self-defense know-how, and even to compete against others. However, you do not have to compete in matches or even be in stellar shape in order to enjoy the benefits of kickboxing. But you do have to train as if you were. If you trained half-heartedly or regularly miss classes, then your optimal benefit will be hard to achieve.