Get Your First Class Free!

Not sure if karate is right for you or your kid? Try for free by using the form to schedule your first class online.

Sandoval Freestyle Karate offers American Kenpo lessons in Chandler for kids, adults, and every member of the family. Many of our students learn kenpo for self-defenses purposes, cardiovascular exercise, staying fit, and even job advancement with local police and security firms. Sandoval Karate American Kenpo classes place a strong emphasis on how to attach an opponent and how to defend an attack from an assailant. Our Chandler martial arts school teaches students how to hone their physical abilities, become more mentally focused, and react instinctively to a physical attack. For information about pricing or to schedule private lessons, please contact us directly.

Kenpo lessons are divided into classes based on belt level and age group. Student’s first goal is to achieve their white belt with the ultimate goal of reaching black belt status and becoming an official Sandoval Freestyle Karate Black Belt Team member.

When testing for belt advancement, students must master specific movements, including self-defence tactics, forms, and katas. Advanced students also must learn certain motions for achieving their next level; however, they are also taught to use weapons, such as the bostaff, Eskrima sticks, nunchucks, swords, and sais.

Developed as a self-defense martial art, American Kenpo also has a strong emphasis on using punches and leg strikes. Ed Parker is known as developing American Kenpo, and as a form of karate, the sport often is compared to kung-fu.

The word kenpo translates to English as “method of fist and hand”. Kenpo gained popularity across the world as a martial art form that teaches practitioners to make short-range, quick movement attacks. A fun fact about American Kenpo, is that Elvis Presley was a student of Parker.

Throughout the world there are many forms of kenpo involving a variety of techniques. Though there are subtle differences, there is little variation in the effectiveness of the overall fighting style.

Some of the kenpo styles include:

When training in American Kenpo, you are shown a deliberate set of movements and strikes that are designed to inflict the maximum amount of physical damage. These movements include a series of blocks, punches, kicks, palm strikes, joint locks, throws, and take down maneuvers. It’s been proven through several experiments that attending American Kenpo lessons will improve upon one’s self-esteem, confidence, and communication skills – having significantly positive results on adolescents who have issues fitting in, are bullied, or are known to have obedience problems.

In American Kenpo, katas are a primary requirement for all students, as this helps to create muscle memory and improve one’s abilities. Sparring is another focus of American Kenpo that trains practitioners how to react to strikes, counterstrike, defend, and evade. 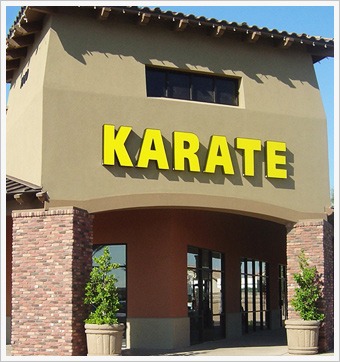 My daughter has been attending Sandoval Karate for the last couple years. My husband and I have been very impressed with it. The instructors are great with the kids and have gone above and beyond. I appreciate the time they put aside to help the kids achieve their goals. My daughter has a hard time when it comes to the belt testing but does great in the regular classes. They have stayed after class to help her…
Read full review…

We have been going to Sandoval Freestyle Karate for the past two years and couldn’t be more pleased. The instructors are amazing with the kids. My son has learned karate while having fun at the same time. It is always a positive and encouraging atmosphere while maintaining the integrity of martial arts. All the instructors we’ve had these past two years have been top notch, especially Mr. Garrett…
Read full review…