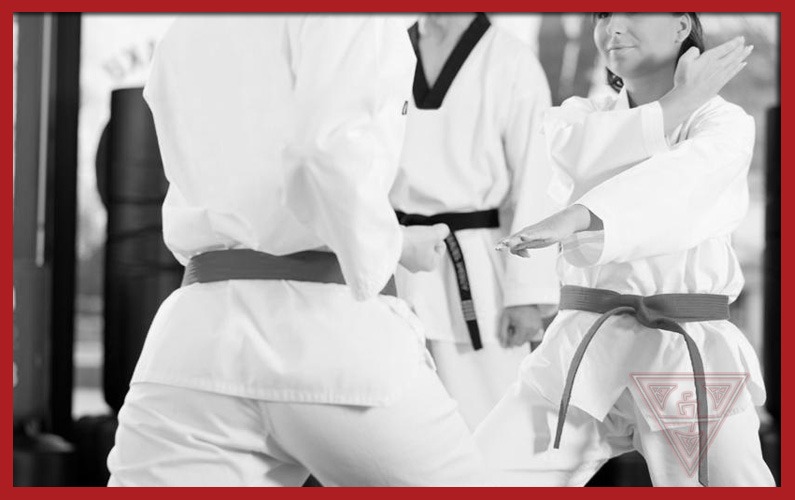 Those with limited exposure to martial arts may believe that Japanese karate and Korean taekwondo are almost the same or very similar, but this is incorrect. While it’s true that there are several similarities, they are ultimately disparate fighting systems which each have a different emphasis, so don’t expect carryover from one discipline to the next. Below, we will first look at the few similarities before moving on to the differences.

What are the Similarities Between Karate & Taekwondo?

Both are methods of unarmed combat with connections to civilian and military self-defense, and both look to use the laws of physics and natural forces to help practitioners overcome much larger foes. In karate and taekwondo, physical and mental fitness are of paramount importance, and students are taught awareness, self control, and morality. In both forms of martial arts, striking is the primary goal, with grappling of secondary importance.

Was Taekwondo Derived from Karate?

How Does Taekwondo & Karate Differentiate?

The most obvious difference is the country of origin. karate originated in Okinawa, Japan, while taekwondo was developed in Korea. While both martial arts involve striking with every part of the body, taekwondo places a greater emphasis on kicking, whereas karate focuses on hand techniques. This is obvious when you look at the meaning of the names: karate means ‘empty hands,’ whereas taekwondo means ‘the way of the foot and fist’.

Both taekwondo and karate have evolved differently from their original purpose, which was self-defense. During the early years of both martial arts, practitioners were trained to fight empty-handed, but now that weapons are more commonplace, both forms of martial art could be said to have evolved past the point of being for self-defense only.

Both Disciplines are Based On Honor & Respect

Karate is now seen by many as a symbol of Japanese tradition and is deemed to be more regimented than its counterpart. Although the karate dojo and taekwondo do-jiang are serious environments, karate can be said to place greater emphasis on ritual and rigidity. Consistent speed and synchronized movement are hallmarks of a well-run dojo.

Taekwondo in the Mainstream of Sports

Taekwondo is now seen by many to be as much of a sport as a martial art. The fact that it is an Olympic sport where karate is not also helps fuel that belief. Students of taekwondo are taught to be more fluid and self-expressive. While this can lead to ill-discipline, it can also make attacks more devastating and unpredictable.

Ultimately, there is no ‘right’ choice when it comes to picking between these two martial arts. Anything that gets people off the sofa and teaches them self-defense techniques is to be applauded. Once you find the right school with capable and attentive teachers, you are sure to have a fantastic time.