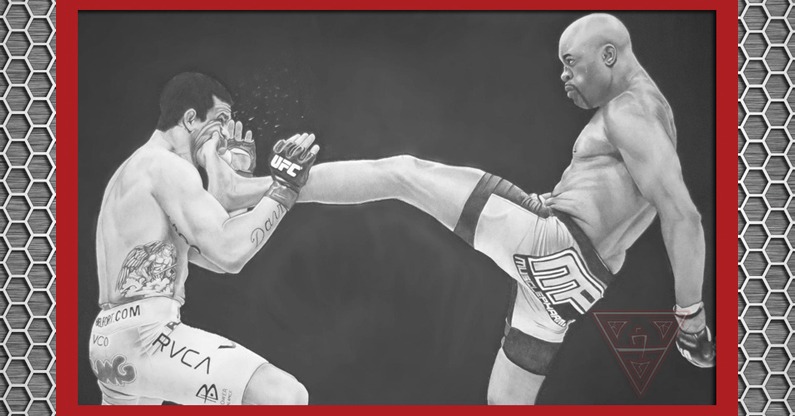 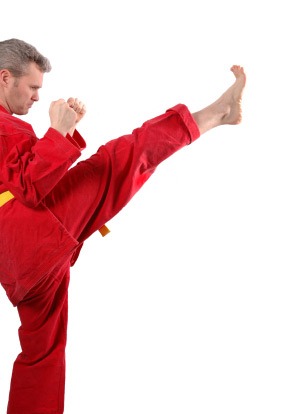 Note that his hands are held high, elbows are close to the body, head is lowered with chin tucked down, non-kicking leg is bent slightly, ball of foot is pointed towards target, and toes are pulled back.

One of the most lethal strikes in martial arts is the front kick; although it’s rarely thrown in MMA in comparison to roundhouse kicks. The reason that a front kick is so effective is that it is hard to block, especially when timed just right. Due to the strike coming straight on, opponents are often ill-prepared.

AKA: Straight Kick or Push Kick

In martial arts, there are three basic kicks that all novice practitioners learn first, the roundhouse kick, also known as a turning kick or a power angle kick, the side kick, also called a twist kick, and the front kick, also referred to as a straight kick or a push kick.

For long-term practitioners of martial arts, the front kick is one of the most commonly used weapons. This is due to one’s ability to quickly throw the strike with a lot of power, even though it takes minimal wind-up to execute when compared to the other two main kicks. Another plus for throwing front kicks is that it can often be difficult to block, especially when properly set up or when thrown is a succession of strikes.

There are a few different ways to properly perform a front kick. This kick can be thrown from a typical sparring stance with either the front or rear leg. Often when thrown with the front leg it is a quick snap, whereas the rear leg will generate more power and can be executed with more thrust. Both variations of the kick should begin by chambering the knee high, then pushing forward aiming to hit your target with the ball of your foot.

Correct technique involves accelerating forward by digging your heel and toes into the mat as you motion to strike your target. For better balance and more spring, slightly bend your planted leg and push forward as you prepare to hit your opponent. For more power and speed, especially for the rear leg front kick, turn your hips into your strike. It is important to point your foot at your target, to pull your toes back, and to bring your kicking leg back to the ground as quickly as possible to prevent it being grabbed.

The kick begins by first bringing your knee up and then pushing your foot forward. The heel and then toes must spring forward from the ground in one motion, snapping the leg forward towards your target. Bend the leg you are standing on while kicking to give yourself better balance. Your foot should be pointed forward with your toes pulled tightly back. The striking surface is the ball of the foot.

Video: How to Throw a Front Kick

Keep these aspects of front kicking in mind while practicing.

Thrust your hips forward with the kick to add power and speed.

Hold your hands up high, keeping your guard up throughout the kick. Do not allow your arms to swing down or behind you.

Try to keep your head tilted down, with your chin tucked-in low.

Try not to lean to far forward or backward. Stand tall with your back straight.

Chamber your leg high and strike the torso area to execute your most powerful kick. Often the higher the kick, the less power the kick generates.

Mix-up your kicks, throw low and high kicks and both front and back leg kicks.